Henry Clay Adkins is from Eastern Kentucky. He graduated with a BA in History from Morehead State University in 2018.  During his undergraduate studies, Adkins presented on the Poor People’s Campaign of 1968 at the Appalachian Studies Conference at Virginia Tech in 2017. His most recent project was on the concept of Appalachia as “Trump Country.” His current research interests include poverty, prisons, and social activism in Appalachian history. Other interests include U.S. environmental history, Cold War history, and oral history projects. Adkins is working towards his MA in History with a certificate in Public History. He plans to pursue a Ph.D. in History after finishing the MA program at Virginia Tech.

Jessica Brabble is pursuing an MA in History with a certificate in Public History. She graduated from North Carolina Wesleyan College, where she majored in history, sociology, and psychology. Her research interests include late 19th- and 20th-Century U.S. cultural and history. In particular, she is interested in studying the role of better baby contests in North Carolina’s eugenics movement. After graduation, she plans to move on to a PhD program and work in academia.

Noah F. Crawford is from Charlottesville, Virginia.  He graduated from Christopher Newport University with bachelor’s degrees in history and American studies.  His research interests include the American Civil War and early American history.

Ben Olex is from Rockaway, New Jersey. He went to Ramapo College of New Jersey and majored in history and minored in political science. His research interests focus on the history of the British navy.

Dylan Settle is from Hardy, VA. He received his Bachelor’s Degree in History from Virginia Tech with Minors in War and Society, International Studies, and Leadership and is now working towards his MA in History. His research interests focus on the history of US foreign relations and geopolitics, particularly in the Middle East. Upon graduation, he plans to become an Intelligence Analyst for one of the agencies in the Federal Intelligence Community.

Iris Swaney is working towards an MA with a certificate in Public History. She was born and raised in Alexandria, Virginia. She graduated from Virginia Tech with a B.A. in History in December 2018. Her research interests are focused on the history of second wave feminism, the battered women’s movement, and oral history.

Sydney Sweat-Montoya is working towards her MA in History. She graduated from the University of West Georgia with a BA in History. Her current research focuses on the Early American Political Economy and the evolution of banking from British America into the Early Republic. 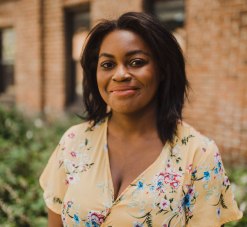 C. Valencia Turner is from Suffolk, Virginia. She received her undergraduate degree in Political Science from Virginia Tech in May 2018. She studies desegregation in public schools, specifically the aftermath of Brown v. Board for black educators after being inspired by the stories of her grandparents who desegregated their schools as teachers. Upon graduation, she plans to enter a joint JD/PhD program and eventually work for a museum while doing pro bono defense work for juvenile offenders.